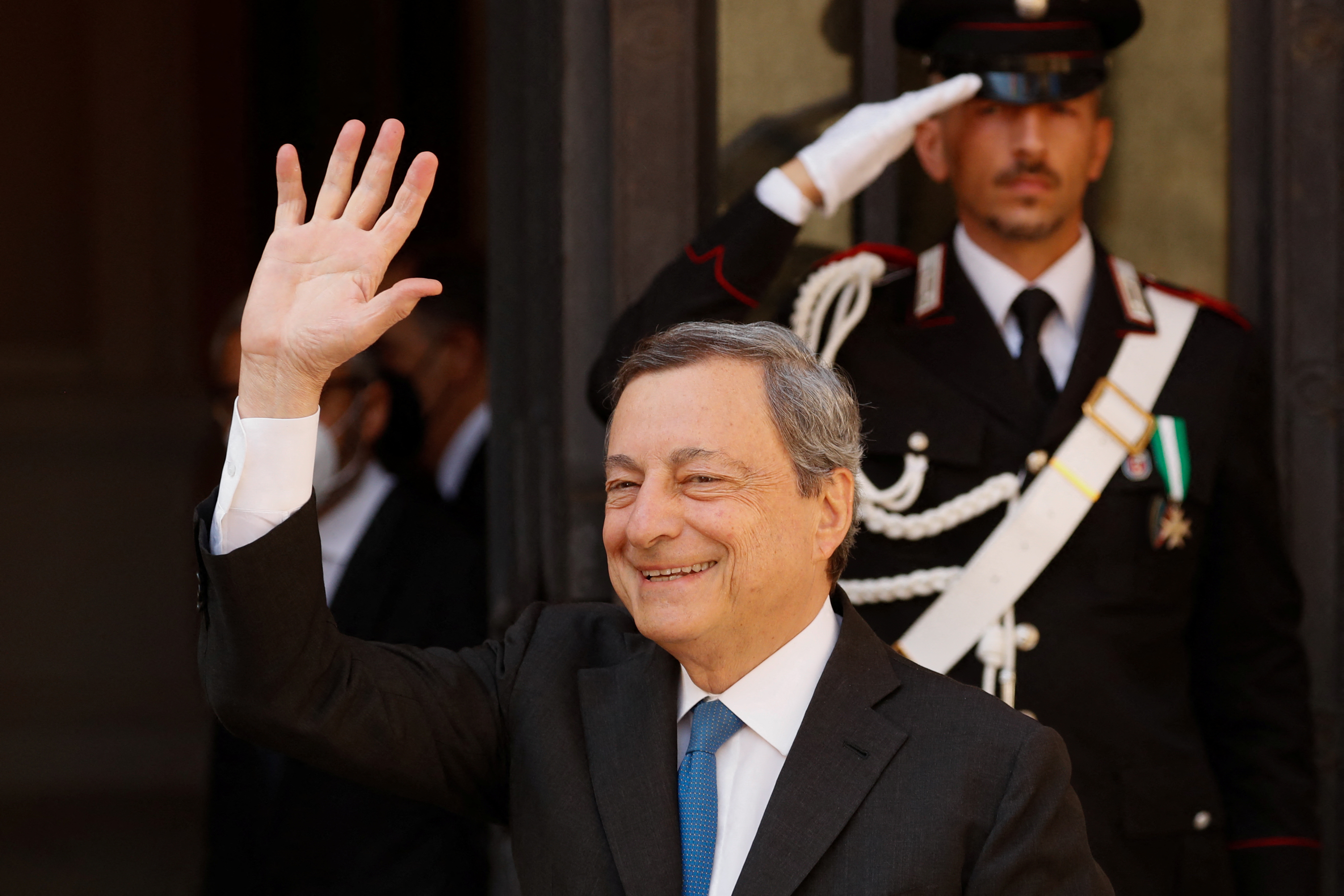 In two and a half years Italy had had two governments of the opposite sign in whose photo the 5 Star Movement and Giuseppe Conte always appeared, almost by chance becoming prime minister. They were years of turbulence, populism and threats to Europe. But the looming crisis derived from the pandemic, the problems in the vaccination campaign and the traditional parliamentary seismic movements, caused the second crisis of government in the legislature. The President of the Republic, Sergio Mattarella, took a look at what in Italy is known as “the state reserves” and chose the man with the greatest authority and prestige in the country: Mario Draghi. The former president of the European Central Bank (ECB) hesitated for a while. His legend ran the risk of being sullied by the mire of politics. But the idea of ​​leading a government of national unity that would democratically legitimize what the polls had not given him ended up convincing him. Just 17 months later, that element is gone. But his work has been extensive and he has placed Italy in an unusual place in recent years.

Draghi chose a mixed Executive made up of technicians and politicians. He knew how to satisfy the needs of the parties, but he also found figures of enormous prestige in civil society and in the business world to take charge of fundamental portfolios such as Economy, Ecological Transition or Digital Innovation. The new prime minister put order in the mess created by the previous Executive in the drafting of the recovery plan projects, which were to make Italy the largest recipient of European funds to alleviate the effects of the pandemic (no less than 230,000 million euros between loans and lost funds). He launched the necessary reforms to receive this huge economic injection. And, despite the fact that some of them ran aground and are still pending (such as that of the competition), he managed to put into orbit that of justice, that of public administration and an important part of that of the treasury. Nobody remembered a prime minister in Italy that he had done so much in such a short time.

The prime minister, a silent man unaccustomed to the turbulence of Italian politics, took the reins of the country in the midst of the vaccination campaign. Italy had been one of the countries in the world hardest hit by the pandemic. The first place where one of the zero zones of its impact was detected. And the first thing he did was to replace the hitherto extraordinary commissioner, Domenico Arcuri, with a military man: General Francesco Figluolo. It worked. The vaccination curve grew, reaching a record number of daily inoculations. And in that period, Draghi was inflexible and the restrictive measures were not attenuated, leading in Europe the imposition of the vaccination certificate and the obligation of the dose for practically all public activities, including work. The measure cost him riots in the street and within the Executive, but he held his own and was able to avoid the controversies.

Italy’s international profile, extremely damaged by populist governments or by the memory of the antics of former Prime Minister Silvio Berlusconi, grew enormously again. And at a time when Germany and France were immersed in internal electoral campaigns, Draghi, pushed by his legend as the savior of the euro, emerged as one of the reference voices of the European Union. The Italian prime minister, yes, preferred to recover the old scheme in which the country functioned as a hinge in the Franco-German axis (his predecessor, Giuseppe Conte, had opted for the Mediterranean axis). Italy was once again the protagonist —for good— in international events and organized the last G-20 summit in Rome with enormous success. Everyone wanted to be in the photo with the new fashion leader.

Italy took advantage of this pull and was a protagonist in the Ukraine conflict. After years of flirtations by all governments with Moscow (from Berlusconi to the dark dealings of the right-wing leader Matteo Salvini), Draghi rooted out that promiscuity and resolutely opted for support for Ukraine. So much so that he cost him the first explosion that caused the current government crisis with the 5 Star Movement. The firm commitment to sending weapons to kyiv was not shared by its partners crickets, who decided to oppose this initiative to mark their own profile that would stop the electoral and parliamentary bloodletting they were suffering. Still on Wednesday, Draghi returned to bet on it when he believed that there were still possibilities to redirect the situation. The night before, he had been called by the Ukrainian president, Volodímir Zelenski, so that he would not resign. But it was no longer up to him.

Draghi’s photo with the French and German leaders, Emmanuel Macron and Olaf Scholz, on a train traveling to kyiv placed Italy’s position in this conflict more clearly than ever. Draghi’s Italy forcefully vindicated its Atlanticist and Europeanist values, something not so obvious after years of populist and Eurosceptic turmoil. A relief for the head of state, Sergio Mattarella, the main defender these years of that scheme so battered. He is the same man, precisely, that Draghi aspired to succeed as head of the presidency of the Republic. And it is possible that just at that moment, last February, his problems began.

The election of the head of state confirmed that Draghi is an extraordinary manager and one of the most prestigious men in Italy. He has not needed to spend years in politics to be acclaimed by citizens and part of Parliament. But the volcanic politics of the country also requires other qualities that, perhaps, are not among the best of the prime minister. In February he was the victim of all kinds of traps and tricks that prevented him from exchanging the Chigi Palace, seat of the Presidency of the Government, for the Quirinal Palace, where the head of state resides. He was somewhat shaken, but quickly recovered. At the end of July, in the middle of summer, when most accidents and catastrophes usually occur in Italy, he has once again been devoured by that self-destructive and grotesque drive of Italian politics. An indomitable nature that for 17 months he managed to keep at bay.

Pepe does not rule out participating in the next World Cup

Messi crosses Argentina to the quarter-finals
46 mins ago

Van Gaal: We qualified after suffering
1 hour ago

America collides with the Netherlands in the final price

Biden secures the decisive vote for his star law against inflation and climate change | International
August 5, 2022

Biden on the Buffalo massacre: “White supremacism is poison” | International
May 17, 2022

Biden on the Buffalo massacre: “White supremacism is poison” | International

Alonso Moleiro, Venezuelan journalist: “Chávez was the first great charismatic populist of this time” | International
May 26, 2022

Russia will punish with up to 20 years in prison the military who go over to the Ukrainian side | International
June 14, 2022

Brussels rewards Poland’s turn with the approval of 35,400 million for its recovery plan | International
June 1, 2022

Brussels rewards Poland’s turn with the approval of 35,400 million for its recovery plan | International