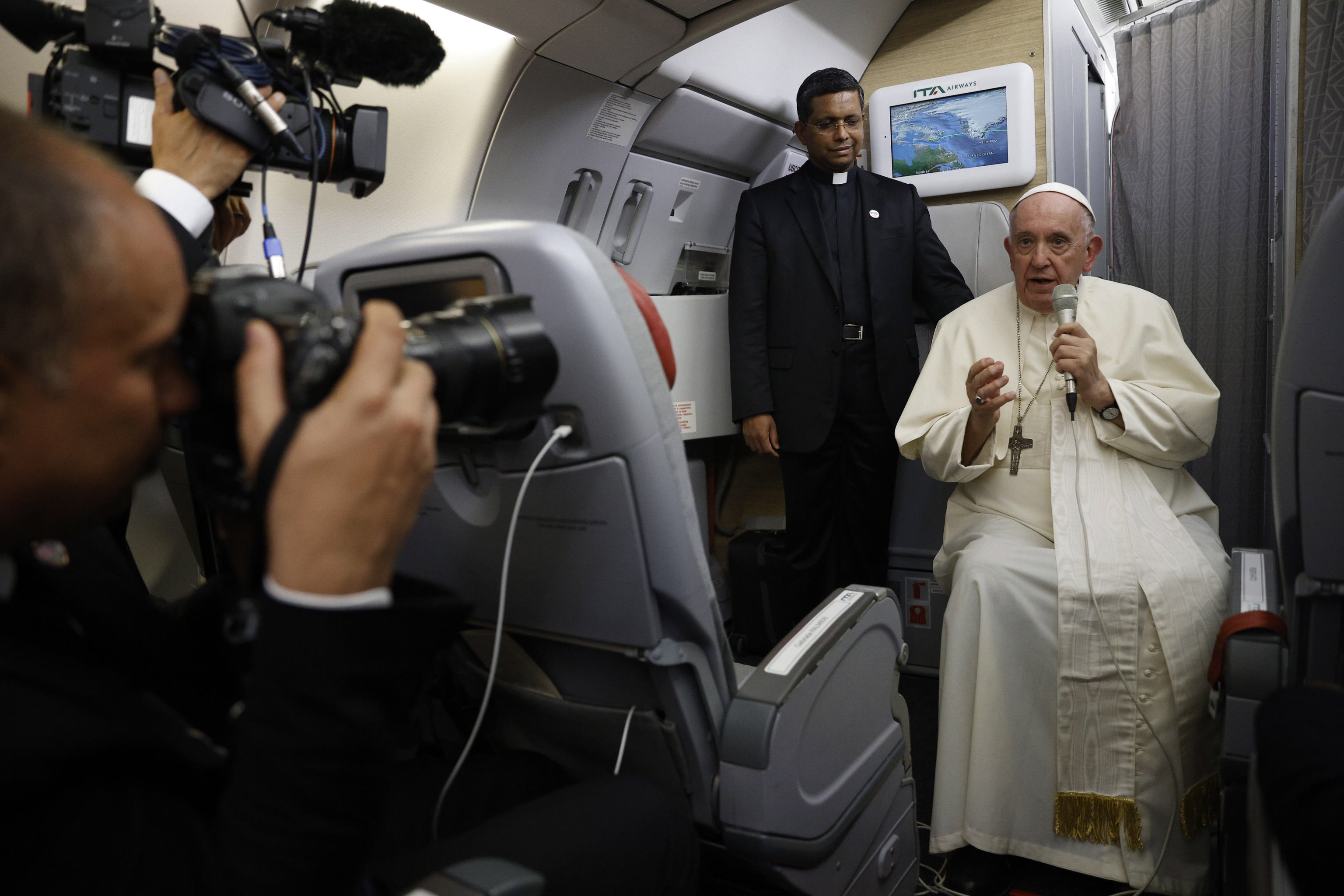 Pope Francis has assured this Saturday that he does not rule out resigning the pontificate, although he has clarified that he is not considering doing so right now. “Changing the pope would not be a catastrophe,” the Argentine pontiff told the journalists who accompanied him on the flight back to Rome from Canada, where he has spent six days with a packed agenda. “The door is open, it’s one of the normal options, but until today I haven’t knocked on that door, I haven’t said: ‘I’m going to enter this room.’ I haven’t wanted to think about that possibility. But that doesn’t mean that the day after tomorrow I won’t start thinking about it”, he specified.

Bergoglio, 85, has also acknowledged that knee problems make it difficult for him to walk and force him to reduce his activity, especially in relation to the strenuous pace of papal trips. “I don’t think he can go at the same pace as before. I think that at my age and with this limitation [la lesión de rodilla] I have to reserve some strength to be able to serve the Church. Or I could also consider the possibility of stepping aside, which honestly would not be a catastrophe, since the pope can be changed without a problem, ”she has pointed out.

In Canada, the pope has maintained the planned agenda, with visits to three regions, although he has moved in a wheelchair and has been seen fatigued and having difficulty getting up from it. “I have to limit these efforts a bit”, he acknowledged before clarifying that his intention is “to continue traveling and being close to people”, because for him it is “a way of serving”. Francis has a trip to Kazakhstan on the agenda in mid-September and is considering visiting Ukraine in the coming weeks. “I have all the good will, but let’s see what the leg says,” he added.

While the official medical reports from the Holy See are limited and hardly contain explanations, the Pope has spoken about his health problems in the first person and has explained that due to a problem with anesthesia he will not undergo an operation to remedy his pain in the knee, caused by acute knee pain due to cartilage wear, and a microfracture resulting from poor posture due to a ligament problem. “The experts say that it is operable, but the problem is the anesthesia. I was under anesthesia for more than six hours in July last year and it left me with consequences that last to this day. You can’t play with anesthesia. That is why this operation is not convenient for me ”, Francisco has pointed out in reference to the colon surgery that he underwent last year.

In recent weeks, speculations have run high about a possible resignation of the Pope, not only because of knee problems that have left him in a wheelchair and forced, among other things, to cancel his ambitious trip to South Sudan and the Democratic Republic of the Congo that was scheduled for early this month. Also because he has convened a great consistory in August with which he will definitively ensure that the majority of the college of cardinals who elect the next pontiff – and will decide the future of the Church – have been appointed by him. Another fact that has also fueled suspicion is the visit he has scheduled to the Italian city of L’Aquila that same month to participate in the Pardon celebration, a ceremony instituted by Celestine V, the first pope to resign from office, in 1294 , and in which Benedict XVI was inspired for his historic resignation. He made the decision at the age of 85, shortly after confirming during a visit to Mexico in 2012 that the forces were not accompanying him to continue making apostolic trips, an essential task for the pontiffs.

Both Francisco and his closest circle have always denied that he intends to resign, but on this occasion Bergoglio himself has spoken openly about the subject for the first time and has slipped that the moment could be a little closer. “That ultimate decision will be dictated by the will of the Lord. If the Lord tells you that you have to go to the corner, you go to the corner, ”he has pointed out. He has clarified, however, that he has not yet felt “that call”.

The Pope has recognized that the trip to Canada, with numerous internal displacements, has been a test for his forces. “It is true that you cannot make trips in this state, perhaps the style should be changed a bit, decrease, pay the debts of the trips that still remain to be made, reorder…”, he pointed out. The pontiff went to the North American country to apologize for the abuses of the Catholic Church in boarding schools for indigenous communities during the 19th and 20th centuries, under a state policy known as “forced assimilation.”

Macron begins the second five-year period with the most difficult objective: to reconcile a divided France | International

Abha camped for 23 days in Cairo

Brussels asks to freeze 7,500 million in funds to Hungary for corruption | International

Van Gaal: We qualified after suffering
39 mins ago

Al-Ittihad disrupts victory..and guides Al-Hilal to the top spot for women
1 hour ago

Neuer after early exit: The pain is deep
2 hours ago

Neuer after early exit: The pain is deep

Al-Shabab consolidates the lead in the Gulf Quartet
October 15, 2022

Al-Shabab consolidates the lead in the Gulf Quartet

Korea Coach: We lost with naive mistakes
5 days ago

The economic crisis fuels the piqueteros protest in Argentina | International

What is to come was rehearsed in Syria | International
March 11, 2022

What is to come was rehearsed in Syria | International

Al-Fateh and Abha.. Facing the restoration of balance
October 2, 2022

Al-Fateh and Abha.. Facing the restoration of balance