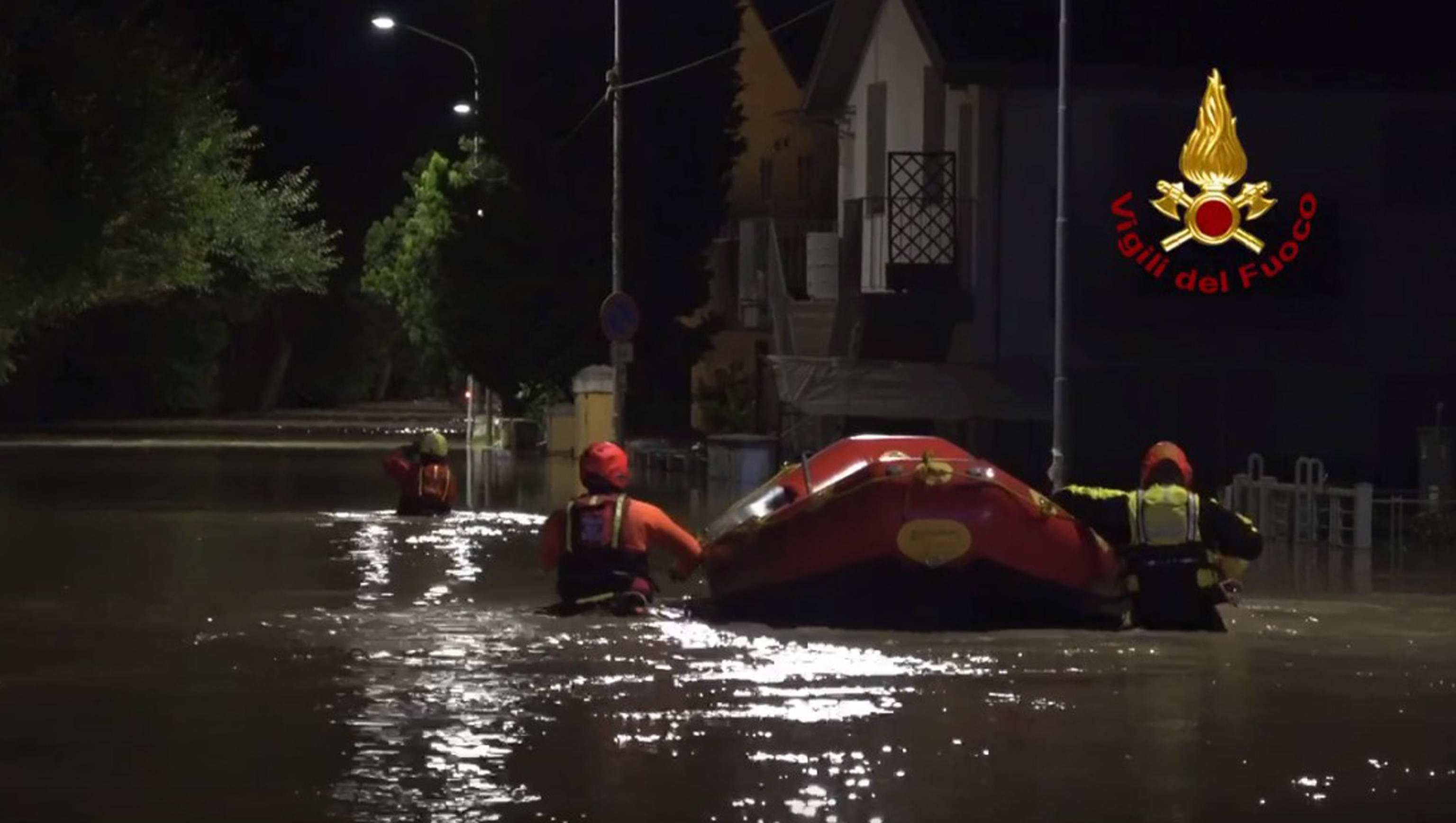 A heavy rainstorm that the Italian press has described as “a water bomb” has killed at least eight people in the Marche region of central Italy, while four others, including two children from between six and eight years, are missing, according to the Italian Civil Protection. The force of the water devastated several towns in that region, where in two hours an amount equivalent to a third of the rains that had fallen throughout the year until now, said Fabrizio Curzio, head of that institution. Although to a lesser extent, the rains have also affected the nearby region of Tuscany.

The eight confirmed dead so far were all in three towns, Ostra, Trecastelli and Barbara, in a single province of the Marche region: Ancona, the same one where the four people whose whereabouts are unknown are being sought. In the town of Senigallia, the bodies of four people who were trapped in a garage have been recovered. The body of another of the victims, a man, was found inside her car, which had been swept away by the downpour. Another man traveling with him was saved by grabbing a tree.

Among the missing are a woman and her daughter, about eight years old, and another boy, between six and eight years old, who was also traveling with his mother in a car that was swept away by the flooding of the Mise River. According to the story of the Italian newspaper Corriere della Sera, citing rescue teams, the mother of the missing child managed to get out of the vehicle with him in her arms, but then both were swept away again by the water. Firefighters rescued the woman during the night but there is no trace of her son at the moment. A witness, a man who had also climbed a tree in the town of Barbara, saw the car “with the mother and child inside as the current swept it away,” according to the Italian newspaper.

At least 180 firefighters have been working on the rescue, supported by helicopters. Many people took refuge on the roofs of houses or climbed trees to escape the water but they cannot even communicate their whereabouts due to the fall of some telephone lines, including those of mobile phones. Many roads have become impassable, which is making rescue work difficult.

“The emergency department of the Senigallia hospital is receiving people in a state of shock and hypothermia, who have been rescued and moved out of their homes, where they were trapped in the water,” said the Regional Minister of Health, Filippo Saltamartini, to the daily The stamp. Other wounded were transferred to other hospitals in the region. The emergency services received so many calls that they had to ask the Tuscany region for help.

The wave of bad weather that has hit the Marche region “was not expected at these levels, we did not have alarm levels. And the flooding of the Mise river, in particular, was sudden and abrupt,” a regional civil protection official told that Italian media outlet. In some places, “there was no time to intervene, there were people who were perhaps on the street or came out without realizing the danger.”

The mayor of Sassoferrato, also in Ancona and one of the towns most affected by the storm, assured that they had not received any special warning that something like this could happen, only a regular alert for wind and rain. “Nothing made us foresee this disaster. It all happened in the space of an hour. Now the sky is clear, the mayor told Radio Capital.

Farmgate: A scandal with spies, a luxury farm and a millionaire robbery surround the president of South Africa | International

Check Also
Close
In front of Poland.. France is chasing the revenge of the forty years
11 mins ago

In front of Poland.. France is chasing the revenge of the forty years

With 22 goals… Messi and Ronaldo tie
2 hours ago

Messi crosses Argentina to the quarter-finals
2 hours ago

Al-Kalili.. the fastest at the King Abdulaziz Falcon Festival
1 day ago

Al-Kalili.. the fastest at the King Abdulaziz Falcon Festival

One dead in an attempt to leave Cuba illegally, mired in a serious migration crisis | International
June 30, 2022

One dead in an attempt to leave Cuba illegally, mired in a serious migration crisis | International

The Ministry of Sports organizes the “Cat Walk” initiative for walking
October 12, 2022

The Ministry of Sports organizes the “Cat Walk” initiative for walking

Last minute of the shooting, live | Biden will travel to Texas to accompany the families of the victims | International
May 26, 2022

Last minute of the shooting, live | Biden will travel to Texas to accompany the families of the victims | International

China calls for “dialogue” and “negotiation” in the face of Putin’s war escalation in Ukraine | International
September 21, 2022

Real Betis jumps to the “fourth” with the Almeria treble
October 16, 2022

Real Betis jumps to the “fourth” with the Almeria treble

Mike Pence takes a step forward towards a possible candidacy for the US presidency in 2024 | International
July 23, 2022